Tea towel
The tea towel is also known as “tea cloth”. It is made of fiber such as hemp and cotton. The main function of the tea towel is dry pot. Dry the water in the teapot or tea sea bottom before discretion, or wipe the table.

Use
Small fabrics used in kitchens, dining rooms, washrooms, etc., generally in the range of 19 × 19 ~ 127 × 178 cm 2 (7.5 × 7.5 ~ 50 × 70 inches 2), the raw materials are mainly medium and thick cotton yarns. There are also some cotton and linen blended yarns. The organization is mainly made of plain weave and jacquard and also has a pattern of lattice or geometric pattern formed by interweaving the thick and thin yarns. The finished product feels thick and soft and has good moisture absorption. It is generally used for washing dishes（kitchen towel）, rubbing hands, protecting hands from anti-scalding, anti-greasy, etc., and can also be laid on the coffee table for decoration.

Clean
1. The tea towel is stained with tea stains and can be washed immediately with 70-80% hot water.
2. Old tea stains, can be washed with concentrated salt water, or washed with ammonia and glycerin mixture (1:10). Silk and wool fabrics are banned from ammonia, can be rubbed with 10% glycerin solution, washed with detergent and rinsed with water.
3. Should not be exposed to the sun, so as not to make the tea towel hard.
The square towel that is used at any time when drinking tea generally does not exceed the size of the handkerchief. The texture is mostly knitted cotton and has strong water absorption.
Tea culture is a kind of leisure culture. It pays special attention to the appearance and details. The tea-related utensils are all exquisite and compact, as well as tea towels.
The diversification of specialized tools is the most intuitive sign of civilization. Strictly speaking, on the use of tea, the tea towel used in tea drinking is actually not exclusive. It can even be replaced by a rag. However, it seems to be contrary to the elegance of tea. It is the practice of a vulgar person who squats. For those who pay attention to tea art, tea towels must be special. If they are used to wipe other things, such as seashells, it is not suitable, because if there is crumb residue on the tea towel, then wipe the teapot, it will definitely drag the water, there is Unsightly, if you fall into the cup again, it will make the taste of the drink greatly reduced.
When drinking Kung Fu tea, the great function of the tea towel is not only the tea table but also the teapot. The teapot is soaked in the tea tray. If you do not dry the pot and the bottom of the pot when pouring the tea, the water will inevitably drip into the cup along the spout. In the hands of a skilled tea drinker or tea service waiter, the tea towel is not only a tool but also a prop. Every time it is wiped, it is like a habitual manipulation of the tea set, not just for cleansing. Here, drinking tea becomes an art of living. In addition to its practical thirst-quenching significance, it is more important to appreciate aesthetics. 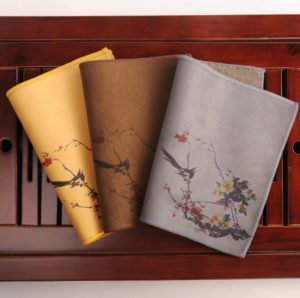 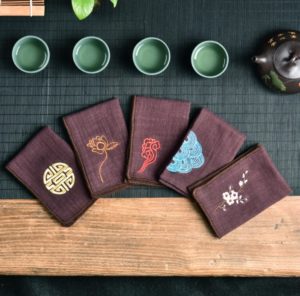 China’s history of drinking tea:
China is the hometown of tea, has a long history of planting tea, has a strict tea ceremony, and has a unique tea drinking custom.
Chinese tea drinking, from the Shennong era, has not been said for more than 4,700 years. Tea ceremony has a fate, ancient has it. “Gulai to worship tea”, this is the traditional Chinese virtue and etiquette of the Chinese Han compatriots. Until now, when guests come home, they always have to make a cup of champagne. Festive activities, also like to entertain with tea. Opening a tea party is simple and economical, elegant and solemn. The so-called “the gentleman’s friendship is as light as water”, also refers to the pleasant and pleasant tea. There is a “bending and licking”, that is, when someone else pours you tea, put the right index finger and middle finger together, natural bend, and tap the table with two fingers, and people call it “Quanzhijiao”.
This tea custom originated in the Qianlong period of the Qing Dynasty. As everyone knows, Emperor Qianlong used to go to the south of the Yangtze River. He was a “loving” emperor. He once drank tea at the Jiangnan Teahouse. He was on the rise and grabbed the teapot to pour water on the courtiers. Everyone can be shocked. According to the rules of the time, no matter what the emperor gives, it is a reward. The recipient has to kneel down, but in public, he does not want to reveal his identity. What should he do? In a hurry, one person comes up with The idea is to do as I said before, and to follow the instructions. I didn’t want to become a tea custom afterward.
In fact, the custom of the prostitutes has not originated in the Qianlong Dynasty, and it is not quite accurate. But when people pour tea for you, there is always a little trick to show gratitude. This is indeed true. As far as some tea areas I have traveled, there are generally two ways: either to hold the cup, at least to stretch your hand, to have a tendency to hold the cup; or to tap the table with your finger. But there is no need to deliberate, there is such a meaning on the line, the essence of the ceremony is still in the heart.