A flower-colored structure of a terry-pointed fabric characterized by braiding a coil with one yarn and braiding the loop with another yarn. There are two kinds of weft-knitted terry and warp-knitted tweezers, among which are single-faced terry and double-faced terry. The single-face weft-knitted terry tissue is generally organized by a flat needle tissue, and the loop is composed of an elongated sedimentation arc segment. In the double-sided weft-knitted loop structure, the two sets of looped yarns are respectively formed on both sides of the fabric by elongated slump arcs. The warp-knitted loop structure forms a loop by using an elongated stretched line segment, and a loop can be formed on one or both sides of the fabric by a partial weft line segment or a coil drop-off manner. The knitted fabric composed of the terry tissue is soft, thick, and has good hygroscopicity and warmth retention. The loops are distributed on the surface of the fabric according to a certain regular pattern, and the knitted fabrics can be obtained by shearing and other finishing. Knitted fabrics are widely used in inner and outer garments and household fabrics. 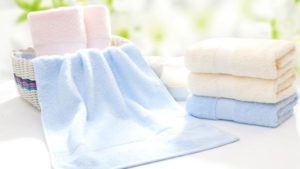 1. Follow the instructions on the label.
2. Choose a mild detergent.
Avoid pouring the detergent directly onto the towel. Otherwise, the detergent residue will leave the towel discolored. Minimize the use of chlorine bleach.
3. Avoid excessive temperature of water when washing.
Dark towels and light towels are washed separately. Do not wash the towel with clothing that contains a zipper, hook or button to avoid damaging the towel coil. Do not wash the towel together with the garment. The terry fabric will wrap the garment with light and soft fabric, and the fine line that falls off the towel will stick to the garment and affect the appearance of the garment.